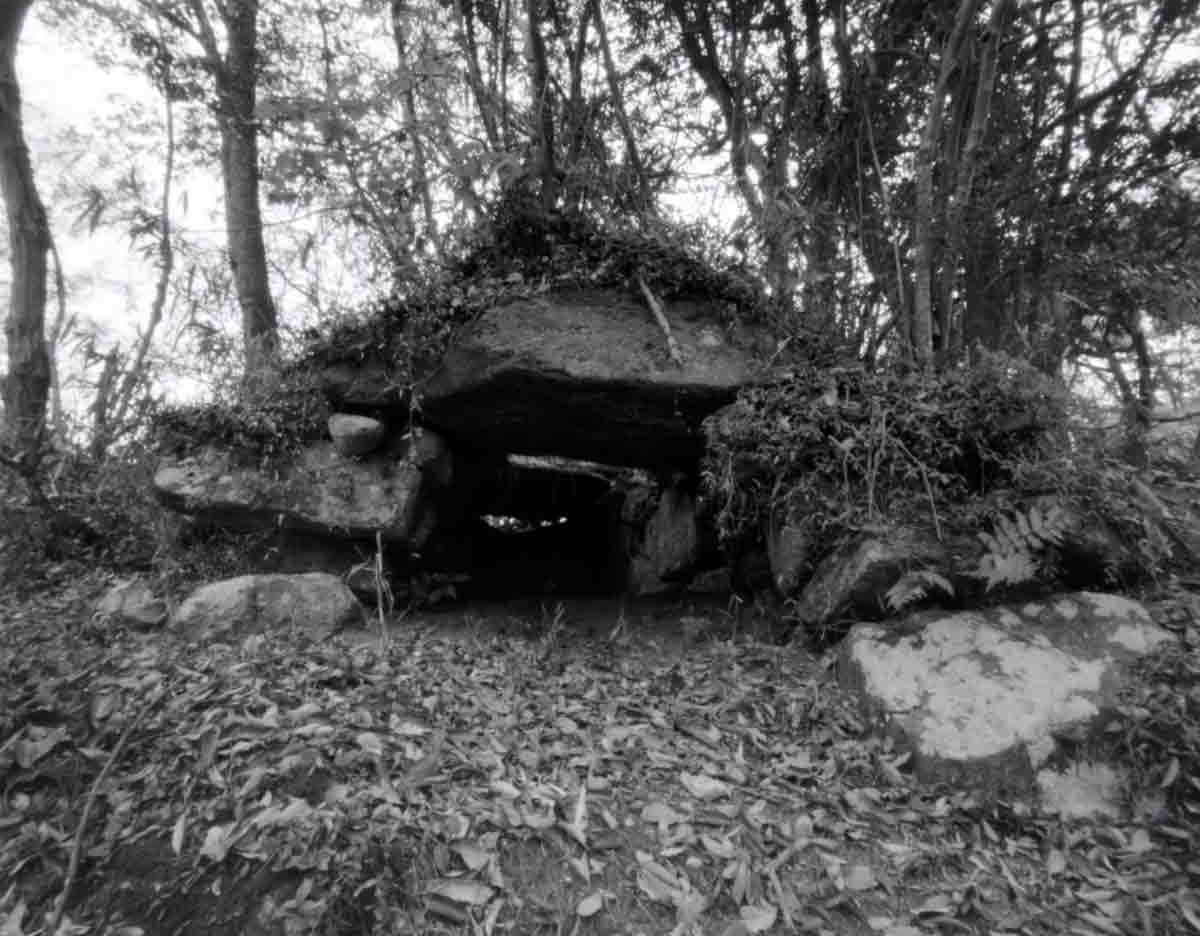 ‘I have been living here for a long time, but I have never seen such a thing,’ strongly expressed a bewildered elderly woman who was busy working on her farmland, attending to her field.
Although the map suggested the Kofun location was close by, it seemed so far way and felt as if it must have been completely forgotten by its neighbors.
There was a path up to a reservoir for farming and it looked like people used to use this walkway in the past. However, once I passed the reservoir, the path disappeared through the overgrown bush and I couldn’t even find any animal tracks.

But I continued to battle through the bush which was almost as high as me, breathing in the aroma of fresh spring leaves and heavy soil.
However, trudging through piles of decomposed leaves and burdened by rain which had just be-gan, it became harder to walk through.
My view was limited because of the overgrown bush and I felt danger of losing my direction, every few steps I took.
Finally, after walking up the ridge and using GPS to make sure I knew where I was, I got to some flat land.
My GPS showed I was 100 meters away from my goal so I was quite relieved but I then realized that I couldn’t continue onwards because ivy was covering everywhere and preventing from getting to my final destination.
It felt as if the ivy was rejecting my way.
Because rain also started pouring down heavily, I reluctantly decided to head back the way I came.

The following day, I retraced my footsteps and near from where I walked up, I found a spot where some kind of land slid down.
When I looked around, I noticed behind the landslide a path which was going up the hill and in the right direction. However, there was a small shrine further on the way and the path disappeared soon after there. I thought it would be too difficult for me to continue forward, especially when I had to walk up very steep hill.
When I gave up going any further and started to walk back, I found a clearing in the bush and as I moved closer, I found a path which people used to use in the past.
I decided to follow this path, which was not easy with new plants covering my way, but I came to some flat land which was similar to where I reached yesterday.
I checked my GPS location and it was showing again that I was 100 meters from my destination.
There was no thick ivy but instead dense bush stopping me from moving on.
Doubts crossed my mind. ‘I have to go back again?’ I thought. However, I was determined to get to my goal so I slowly crept forward and squeezed through narrow clearings in the bush.
After walking for a while, I discovered a noticeable difference in ground level and I went down. There, I found a mound. I realized that here was my destination, a Kofun tomb.
Around this Kofun, there was some open space where someone had probably looked after in the past. The actual grave mound had gone but I found some stones making a circle.
One part of Kofun was destroyed and made a large black hole.
I felt everything was so beautiful. The present shape, which had been created over a long period of time, conveyed a strong dignity which deeply imposed on the serene soundings.
It seemed that all the plants and trees around this Kofun and even the mountain in the far back-ground had been drawn in to become part of this Kofun site.

I thought this was the answer I was looking for. 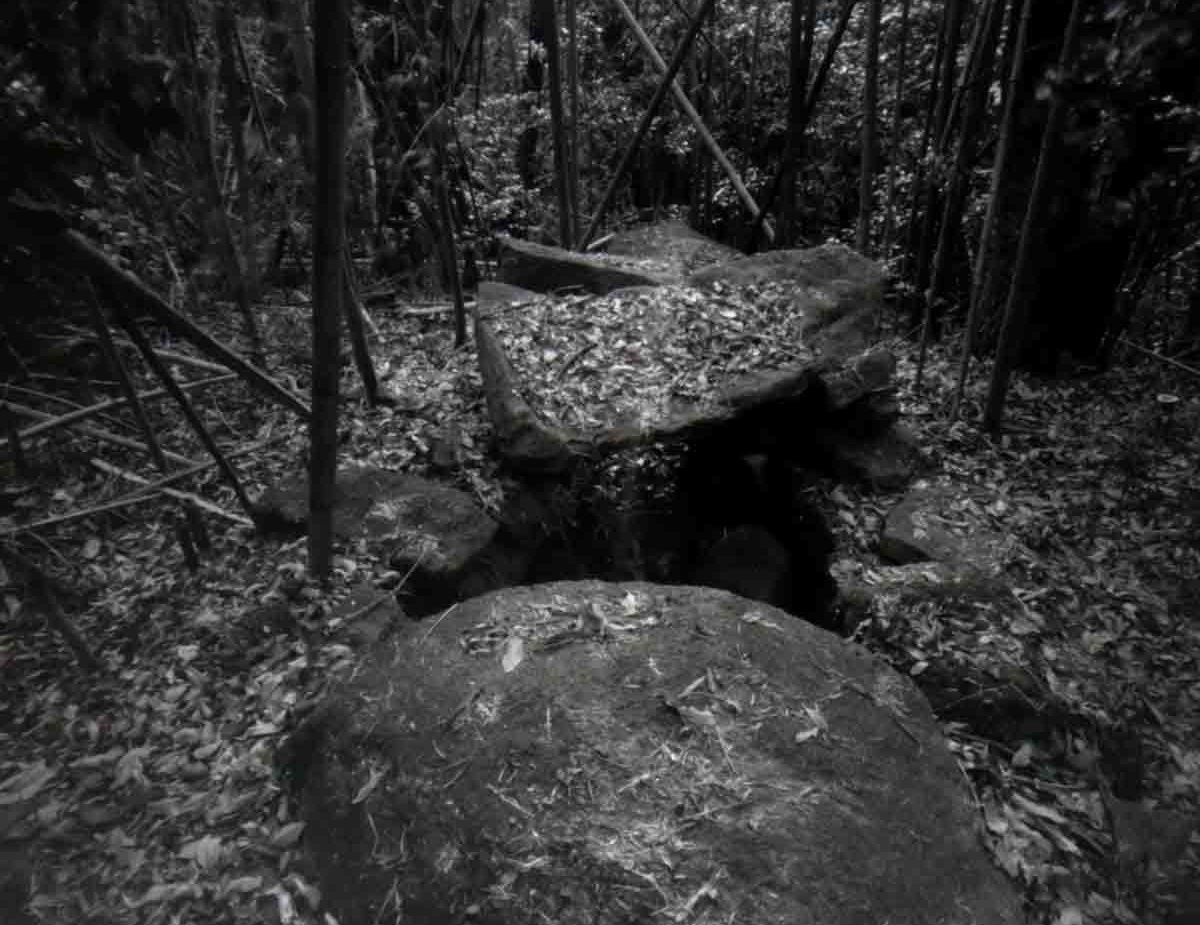 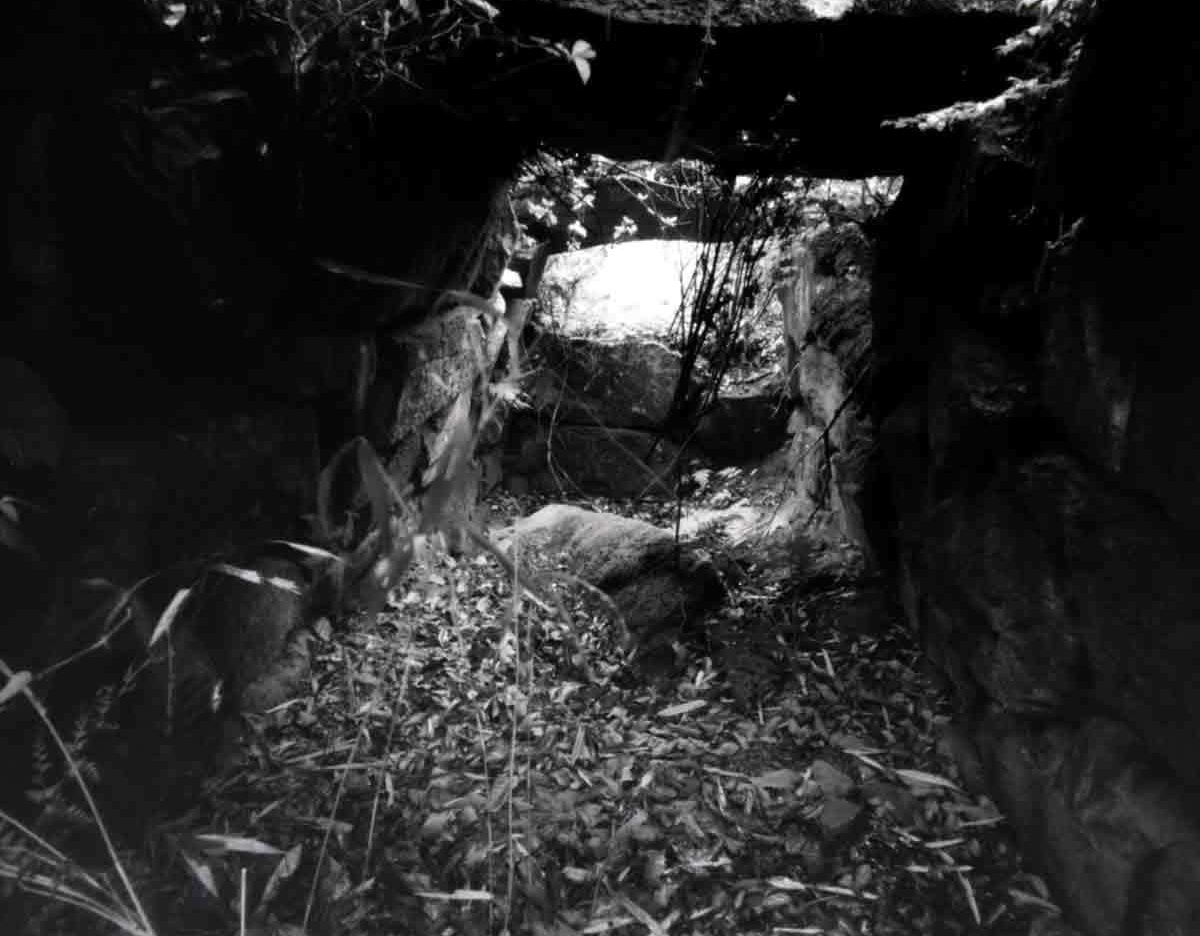